Is it me, or is there an overwhelming amount of racist jabs on social media these days?

Throughout the month of October 2013 I saw one too many racial insults in my Facebook news feed. One post in particular got more than 50 comments. The gripe was about Electronic Benefit Transfer (EBT) cards being accepted in hair salons. 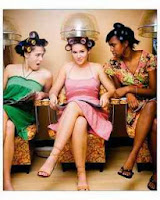 At first I wondered, “Why would food stamps be accepted at a hair salon?” As I read through the comments I realized that I wasn’t the only one who was thinking the same thing. “Does (the owner) have the business listed as a salon/food store,” one Facebook user asked. “You are selling food at the shop now???” Those comments made me realize that I wasn’t crazy and in fact, there is no correlation between food stamps and hair salons. But then the comments started to get repulsive and in my humble opinion, flat out racists.

Some comments went from taking cheap shots at women who prefers to wear protective hair styles, “O shit weaves on EBT?” One FB user took their best shot of mimicking Ebonics, “Girls got to get her hair did.” After reading the comment about “bringing in the China man to do nails,” that was my cue to log off and shut down my laptop.

The next day I went to post my Thought of the Day and saw that the comments from the EBT hair salon issue kept on going. And things got really ugly. Think “Bad Girls Club” ugly. Now, the person who brought up the issue is an old childhood friend of mine and I had a hard time reading comments. Granted, my FB friend didn’t say anything directly about race but the last time I checked there wasn’t any mention of “you’ve gone too far” in the comment feed. In my Jamaican upbringing I was raised with the motto, “Show me your company and I’ll tell you who you are.”

So instead of going on a Facebook rant, I decided to do a little digging and educate myself on what is an EBT, and what demographic uses food stamps the most. Why? Because I got tired of some people assuming that Blacks and Hispanics were the only people using government assistance. When I argue I like to have facts and numbers as back up.

HERE IS WHAT I FOUND

According to StatisticBrain.com, more than 47 million Americans are food stamp recipients. Guess what percentages of that number are using food stamps. The USDA states that 47% are children under the age of 18, and 8% are senior citizens.

Allow me to breakdown the numbers a little bit more. African Americans are still tallied up as minorities in the U.S., which means they only make up 13% of the overall population. A blog from the Washington Post found that 22% of food stamp recipients are African American, 10% are Hispanics, 4% are Native Americans, and 2% are Asian. But how many of you knew that 36 % of food stamp recipients are White Americans? Are you surprised?

A few people who I spoke to during my research were, especially my Caucasian friends. “I always thought that Blacks were the ones who used food stamps because the media usually portrays them as being poor and in the lower class,” one of my close friends said, who I chose to make anonymous. Now this is another topic that needs to be addressed in a later post.

OH SNAP! THIS GETS EVEN BETTER

I then turned my attention to find out what an EBT card is. The Food and Nutrition Service/USDA website explains it as an “electronic system that allows a recipient to authorize transfer of their government benefits from a Federal account to a retailer account to pay for products received.”

I learned something new! EBT is not just for food stamps, actually its correct name is – Supplement Nutrition Assistance Program, or SNAP. Bottom line, EBT is also used for “cash benefits.” What does this mean exactly? Well, for starters people who are on state general assistance, Temporary Assistance for Needy Families benefits, and refugee benefits, receive money on the infamous EBT card. So just because a person has an EBT card doesn’t mean it only has SNAP money on it. So technically speaking there’s nothing wrong with hair salons accepting EBT as a form of payment.

Have you ever thought that maybe the EBT cardholder may be “in need” to get their hair done for a job interview. Just think, if they got the job that’s one step closer to them getting off of public assistance. Right? I am highly aware that there are some who take advantage of government assistance but that doesn’t justify judging what’s in a person’s wallet, especially on social media news feeds. AMEX, VISA, MC, DISC, EBT and good ole cash are all monetary instruments that pays the bill one way or another.

That’s my view on the matter. What’s yours?

Feel free to leave your comments or you can ...
Email me: astutestories@gmail.com
Tweet me: @TCsViews