More Than a Selfie 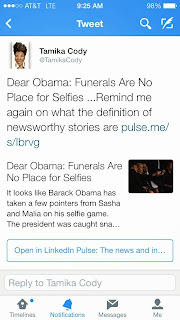 When the story of President Barack Obama taking a 'selfie' with British Prime Minister David Cameron and Denmark's Prime Minister Helle Thorning Schmidt during Nelson Mandela's memorial service hit my LinkedIn Pulse feed I was taken aback. The headline, which came from Mashable, read -- "Dear Obama: Funerals Are No Place for Selfies." My response on my @TamikaCody Twitter account … -- Remind me again on what the definition of newsworthy stories are.

Apparently this was a big story for the social media world. Tons of comments questioning the behavior of President Obama started to trickle in on my Facebook feed. "Do you think President Obama was being disrespectful taking a selfie." Other organizations were more concerned about the look on Michelle Obama's face. "Michelle doesn't look too happy," one commenter wrote.

The more these rants appeared in my social media feeds the more irritated I became.
For the next week and a half I refused to turn on my television because I didn't want to see or hear what the local, national or cable news channels had to say on the matter.

WNYC/NPR was another news organization I was trying to filter out on the topic but on Sunday Dec. 15. 2013 things started to turn around. NPR aired an interview with the Agence France Press photographer who took the picture. Roberto Schmidt gave NPR listeners a full scope of exactly what was taking place.

Schmidt said that it's not often that we see high profiled officials being normal.
Yes folks, taking a selfie these days is the norm. The word even made it in the Oxford dictionary for 2013.

Mandela was 95. He lived a long life. He served humanity. He forgave those who locked him up for more than 20 years. He was a peaceful man. The former president of South Africa was thoughtful, caring and inspirational. Mandela didn't get assassinated. He wasn't murdered. He didn't die in a tragic accident. He was ill for over a year. It was his time for the anti-apartheid revolutionary, politician and philanthropist to go home and rest in "paradise."

Mandela's achievements and death was a celebration. Schmidt made it a point to capture the festivities. People were dancing and singing in the streets. There was a party going on in South Africa. Many cultures celebrate death in this way. I can speak first hand because my family, who are Jamaicans, also celebrates death with music, food, dancing and my family does this for nine days and nights. Also referred to as Nine-Nights or Dead Yard.

Schmidt explained that Mandela's memorial service was four hours long. Halfway through, there was probably an intermission or some sort of downtime and President Obama and his prime minister pals decided to take in a moment with a selfie. So what!

Schmidt informed listeners that there were hundreds of pictures taken during Mandela's memorial service. He said the team captured people dancing, singing and paying tribute to Mandela.

Imagine the colors, the outfits, the performances and tears of joys on peoples faces. Wouldn't you have wanted to see a photography slideshow of those captured moments? I know I would have. Instead, someone thought that President Obama's selfie was picture perfect.

When the comments of The First Lady not being too pleased with her husband started to trickle in I thought, Michelle probably didn't have a clue as to what was happening. She could have been paying attention to something else or thinking about her daughters. Or maybe, just maybe, Michelle was tired of sitting there for two hours knowing that there was another two hours to go. She's human just like the rest of us.

The media has a horrible way of captioning Michelle's reactions and then writing headlines that usually scream, "Angry Black Woman." Of course editors dare not let that headline go through but when they write those headlines they write them to pair with the picture.

Side note to editors covering the First Lady: Choose better pictures. You know, the ones where Michelle Obama doesn't look upset. (Of course this is another story that can run on its own.)

Robert Schmidt gave his own view on the trending news in his own blog post.
(See: The story behind "that selfie")

As a member of the journalism world I apologize for some of the stories that makes breaking news and the front pages. I understand that sensationalism sells, Mashable's self story, which was written by Christine Erickson, was shared more than 45,000 times. (I was one of those shares.) Even though sensationalism gets shares, likes and comments the thing to remember is that you don't have to read it, watch it, or listen to it. You can easily pick up a pen and pad, your laptop or cameras and snap, shoot, and write your own newsworthy stories that are meaningful to you.

Have a newsworthy story you'd like covered…tweet your story ideas to @TCsViews or e-mail: astutestories@gmail.com. You can even call up, tweet out or Facebook a message to your local paper and TV news stations.
Posted by TC's Views at 3:11 PM