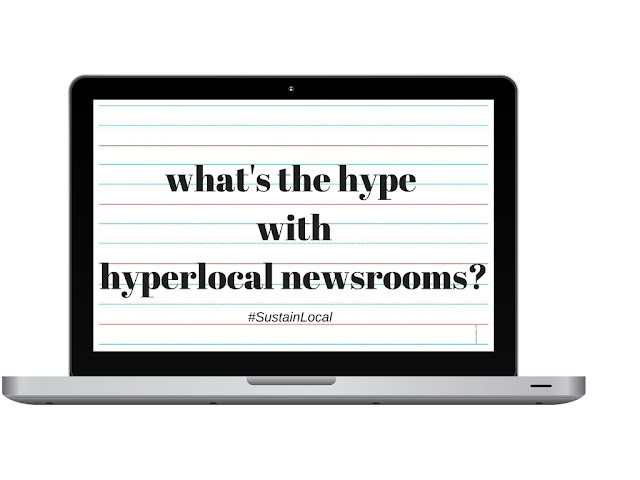 Hyperlocal media outlets like BrickCityLive, DNAinfo, NJSpotlight, Patch, and Wrexham have been popping up in communities all over the world for several years. And like most traditional newsrooms, hyperlocals have to figure out how to stay relevant in the competitive world of journalism and make a profit.

Hyperlocal newsrooms provide informative news on a local level. Now, I’m not talking about Eyewitness News at 5, 7 and 11pm, I’m talking about news that big networks and major publications don’t have time to cover. For example, air/water quality reports, residential development that may affect property taxes, or stories about local residents making their homes environmentally friendly.

To get a sense of what's taking shape in the hyperlocal news community, media professionals were invited to attend Sustain Local 2016 - a national conference on journalism sustainability, which took place on Thursday, October 6 and Friday, October 7, 2016.

The conference, now in its third year, was hosted by the Center for Cooperative Media at Montclair State University, in Montclair, New Jersey.

To fully understand what Sustain Local was trying to achieve, I spoke with several media professionals and asked them to share their main take-aways from the conference.

“This conference was addressing the hyperlocals about monetizing and financing,” explained Jane Primerano, Region 1 Director of the Society of Professional Journalists. “I know many people who are struggling with hyperlocals.”

Search #SustainLocal on Twitter to see what topics moved attendees during the conference.

Hyperlocals are usually run by veteran journalists who were squeezed out of traditional newsrooms due to layoffs and community weeklies that went out of business. Many of these hyperlocal journalists have multiple roles within their organization, which may include finding innovative ways to generate revenue. “Your average reporter is a terrible sales person,” said Primerano. “Those skills do not overlap.”

Hyperlocals have a reputation of being run by a sole individual. However, a 2015 survey conducted by Arizona State University assistant professor Monica Chadha, found that some hyperlocals have more than 20 employees. And some of those hyperlocal employers are strapped for cash.

“Journalism needs cash,” said freelance journalist Noah Levinson. “You have to find somebody to support it one, way or another.” Levinson’s take-away from the Sustain Local Conference does have merit but no matter what the business model, newsrooms will always have this problem, especially hyperlocal outlets.

After surveying 210 participants from 144 hyperlocals, Chadha’s research found that 39 percent of their annual revenues came from banner ads. The next tier of revenues came from grants, private foundations and subscribers, which collectively made up nearly 16 percent.

Sustain Local had prominent industry movers and shakers participate on a number of panel discussions where attendees learned innovative ways to rake in additional revenue.

Hosting tutorial webinars and events are just some of the ways hyperlocal news outlets can stream additional revenue. “A good third of our income came from events,” John Mooney, founding editor of NJ Spotlight, said during the panel - How 501(c)3 News Organizations are Finding Sustainability.

Nevertheless, holding on to extra income may become a problem for some hyperlocals, especially since advertising is shifting to the social media platform, Facebook, observed Miriam Ascarelli, who teaches journalism and composition at New Jersey Institute of Technology.

“If I were a local publisher, that would be a huge red flag for me,” said Ascarelli. “ You have to have a strategy for keeping those advertising dollars in your news organization and not let somebody else take them.”

As an avid public radio listener, I gave a round of applause when Oreskes said, “People want to support local journalism because they depend on it.” And he’s absolutely right.

Hyperlocal newsrooms are more connected to people in the communities they cover than traditional local news outlets. These days it seems like newsrooms only report about celebrity mishaps, crime and multiple alarm fires. As a results, some traditional newsrooms neglect to balance out their coverage with local community stories.

It’s a good thing there’s a batch of community news organizations taking initiative to give the general public just a little bit more. Hopefully, traditional local newsrooms and hyperlocals will be able to bridge the gap and just focus solely on providing informative news we all can use.

Do you have a favorite hyperlocal? What's your view on the culture of local news? Leave your comments in the box below or email your views to TCsView@gmail.com.

Podcast Alert! The conversation moved from Hyperlocal Newsrooms to sustainable environmental practices. You can hear the "sidebar conversation" on season two of Better Said Than Written - the podcast supplement to Artz of Culturez - via SoundClound and now on iTunes and Sticher.